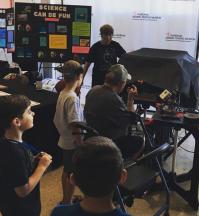 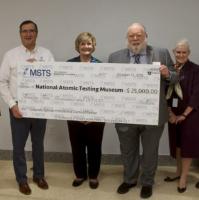 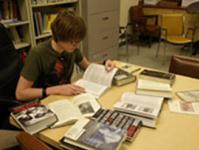 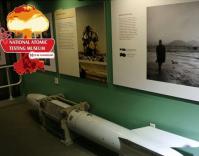 The National Atomic Testing Museum (NATM) is a national science, history, and educational institution that tells the story of America's nuclear weapons testing program at the Nevada Test Site. The Museum uses lessons of the past and present to better understand the extent and effect of nuclear testing on worldwide nuclear deterrence and geopolitical history. It provides collection-based exhibits and learning activities for greater public understanding and appreciation of the world in which we live. Its collections and activities are inseparably linked to serve a diverse public of varied ages, backgrounds, and knowledge.

The National Atomic Testing Museum is one of a handful of private national museums and showcases some of the rarest of artifacts relating to the nation's atomic testing program. Nowhere else can you see a large nuclear reactor that was used in the development of the nuclear rocket and the first air-to-air missile, Genie. Personal atomic weapons that were developed to use in place of conventional weapons such as the Backpack Nuke and the Davy Crockett Weapon System (recoilless gun) are placed throughout the 8,000 square feet of museum exhibits.

From Atomic Age culture to the scientific and technological advances, the Museum highlights 70 years of nuclear testing. The end of the Cold War is depicted through a piece of the Berlin Wall complete with the celebratory graffiti painted by Berliners when the wall came down. Two pieces of the World Trade Center signify the beginning of the Global War on Terror and how the Museum today plays a role in the training of first-responders from across the nation who come to learn about the nuclear materials terrorists might use.